Kobe Bryant: Delusional or a Symbol for Change? 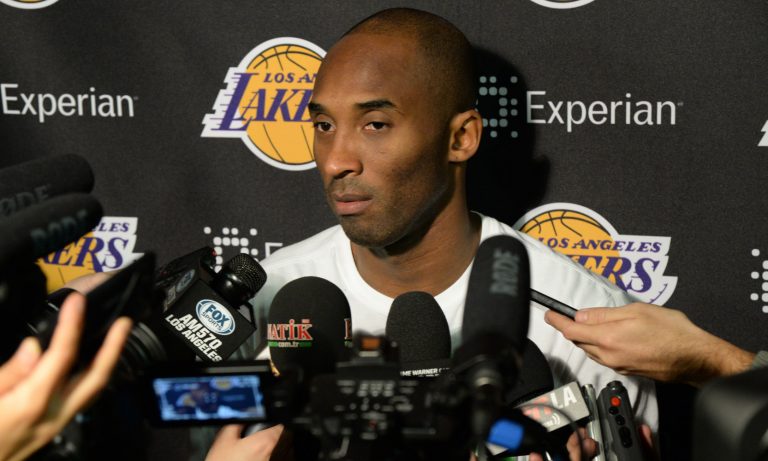 Simply put, Kobe Bean Bryant — i.e. the (self-proclaimed) Black Mamba — is a basketball legend. Unlike Paul Pierce who gets wheeled off the court with a hurt ego, the Mamba tears his Achilles, sinks two-free throws and walks to the sideline under his own power. NBA Championships, Olympic gold, scoring titles and MVPs are all resume builders, but the true legend was born on April 13, 2013 at 3:30am. In the wake of that devastating injury, Kobe took to Facebook to lay down the guiding ethos of Mamba Mentality.

“If you see me in a fight with a bear, prey for the bear.” Ive always loved that quote. That’s ‘mamba mentality’ we don’t quit, we don’t cower, we don’t run. We endure and conquer.

There are two undeniable takeaways from Kobe’s comments. Firstly, the typically eloquent Bryant ironically misspells the word pray (self-fulfilling prophecy, we shall see). Secondly, Kobe’s will to succeed is remarkable, if not maniacal. Thus, it surely wasn’t surprising when he returned to NBA action only eight months following a left Achilles tear — an injury that can take up to two years to recover from. Nor was it surprising that he lasted only six games before injuring the knee in that very same left leg.

Expected to be sidelined for 3-4 more weeks, Kobe’s latest injury effectively sounds the Lakers’ horn for a Riggin-for-Wiggins campaign (though, it can be argued that so did the initial signing of Mike D’Antoni). In response to his latest setback, Kobe — predictably — went Mamba, explaining that he doesn’t “think (the knee injury) had anything to do with the (Achilles injury)… We’ve evaluated it pretty extensively. The fact of the matter is any of us can get hurt at any moment and the key for us as an athlete is to block that fear out.”

It was at this very instant in time when I realized that the Mamba was either delusional, or that his $48 million contract did not require course study in physical medicine and rehabilitation. Apparently, Kobe wasn’t aware that previous injury is considered a principle risk-factor for future injury. We can look no further than to Kobe’s NBA All-Star brethren, Russell Westbrook and Derrick Rose, to prove as much.

To elucidate on the matter, a recent study out of the University of Gothenburg demonstrates that regardless of treatment method, significant functional limitations in strength, endurance and jumping ability persist for two-years following Achilles rupture. These limitations ultimately lead to altered movement patterns, such as impacting the ground with a greater amount of dorsiflexion (i.e. more akin to a heel-strike). This altered landing pattern limits the ankle’s torque and power generation, leading to altered (and potentially deleterious) loading patterns at the knee.

By implicitly guarding the Achilles and impacting the ground with greater dorsiflexion, the amount and/or rate at which force transmits up the lower leg increases, thereby increasing the risk for lower leg and knee injury. To make matters worse, this compensatory change in foot placement limits the training effects to the calf and Achilles, cyclically degrading this musculotendinous complex, and likely, altering applied stress patterns in the leg.

The inevitable nature of injuries and the responsive change in movement patterns places the onus of recovery on the doctor, physical therapist and/or trainer. This is an unenviable task, considering that there is no basis for normal movement. In other words, it is likely that nobody knows as to the specific (biomechanical) movement and loading dynamics Kobe employed prior to injury. Rather, normality is often assessed relative to either some global standard (e.g. strength or endurance benchmarks), or to the uninjured limb (in the case of Kobe, his right leg). However, there is nothing to suggest that the uninjured limb functions optimally. This leads to a gray area of sorts when determining whether an athlete should return to play, often leading to preemptive or delayed returns, and often — as in the case with Kobe — re-injury.

Maybe I should break out the rocking chair and reminisce on the career that was. Maybe this is how my book ends.

If the Black Mamba himself questions whether it is plausible to return from an injury at the ripe-old age of 35, what does that mean for the rest of us? Fortunately, the future is not as bleak as Kobe made it appear in this moment of vulnerability. Over the past few years, there has been considerable effort by the clinical and research community in order to develop return to play protocols for a variety of different orthopedic concerns. Sports Medicine Australia even went so far as to provide a guideline to the prevention and management of Achilles injuries.

The legend of the Black Mamba is on temporary hiatus with injury. For those diehards, the attributing cause may not be sufficient. Why Kobe? Why now? Could this have been prevented? We may never know the answers to these questions, but we’re undeniably on the right track. Kobe’s re-injury symbolizes what many believe to be an underlying problem in healthcare: emphasis on treatment, rather than prevention. Maybe injuries such as Kobe’s could be averted if a baseline level of function is determined by a preemptive biomechanical evaluation. So here’ to hoping that Kobe’s lasting legacy is not just revolutionizing the game of basketball, but revolutionizing how we approach injury prevention. In Kobe’s words, this would be the ‘first step of a new challenge.’